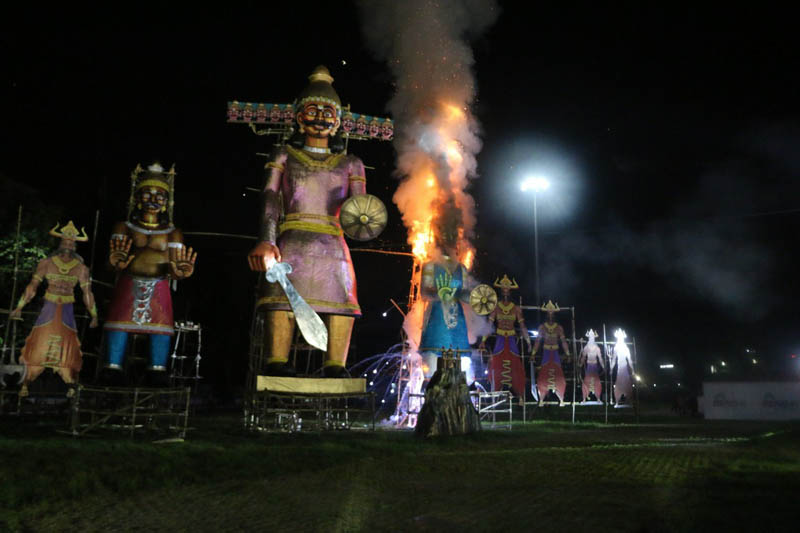 Sting Newz Service: Keeping up with the tradition of burning the effigy in the tricity during Dussehra, the Sanmarg & Salt Lake Sanskritik Sansadburnt 10 Ravana effigy today at the Central Park(Salt Lake), Kolkata. Last year, a 60-feet tall effigy of Ravana was burnt by the committee.

The main objective of this event was to provide a vibrant interface between the citizens and the rich culture & tradition of West Bengal. The event was attended by: Smt. Vaishali Dalmiya, Member of legislative Assembly;  Sri. Sabyasachi Dutta, Mayor of Bidhannagar; Sri. Sujit Bose, Member of Legislative Assembly; Sri. Gyanwant Singh, Commissioner of Bidhannagar City Police; Sri. Lalit Beriwala, President of Salt Lake Sanskritik Sansad & many other eminent personalities.

The event witnessed thousands of devotees, who throng the annual ritual – the burning of an effigy of demon king Ravana. Many people of the Hindu faith observed Dussehra through special prayer meetings and food offerings to the God at home or in temples throughout India. They also hold outdoor fairs and large parades with effigies of the demon king Ravana, which are burnt on bonfires in the evening. Idols of the goddess Durga are immersed in bodies of water.

Speaking about the event, Shri. Lalit Beriwala, President of Salt Lake Sanskritik Sansad said, “We had made special arrangements at Central Park ground to celebrate the victory of good over evil. Besides burning of the 10 effigy of a strongly built Ravana, we had also organised a spectacular fire show which was our major attraction. And for the first time we have organized a mass aarti of goddess Lakshmi. We have hired famous artists and groups (of India’s got talent fame) from various states to perform during the function. Apart from this, a series of rituals were performed before the burning of the effigy where over 15,000 people were present.”

“We have been organising this event since from last six years and people in thousands have thronged to see the grandeur. Our whole team works day and night to ensure that every aspect of the event is very well organised” says Shri. Sanjay Agarwal, Secretary, Saltlake Sankritik Sansad.

Salt Lake Sanskritik Sansad is an organisation dedicated to improve the quality of life of the underprivileged section of the society. It has been established 35 years ago and more than 50,000 residents of saltlake are attached with this organization. We are taking facilities like education, health and associated services to them through different activities like school, charitable dispensary, blood donation camp, book distribution program, marriage hall etc.